Meningitis-linked steroid may have affected 13,000 people in U.S. 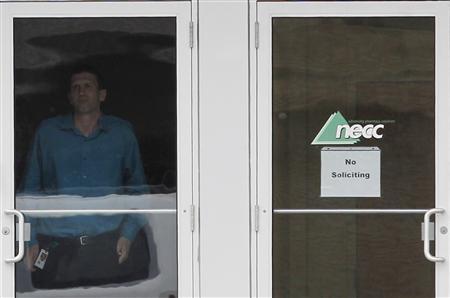 (Reuters) – Some 13,000 people in 23 U.S. states may have received steroid injections linked to a rare fungal meningitis outbreak that has killed eight people, but far fewer are likely to contract the disease, the Centers for Disease Control said on Monday.

The CDC for the first time estimated the number of patients potentially affected, after previously saying only that it could be in the thousands.

So far, 105 cases of the rare form of meningitis have been confirmed in nine states. In hardest hit Tennessee another person has died, bringing the national death toll to eight, the CDC and Tennessee state authorities said on Monday.

Nearly 1,000 people in Tennessee may have received injections from the three recalled lots containing 17,676 vials of potentially tainted steroid, Tennessee Health Commissioner Dr. John Dreyzehner said on Monday. Saint Thomas Outpatient Neurosurgery Center in Nashville received some 2,000 vials, more than any other facility in the country, he said.

The widening outbreak has alarmed federal and state health officials and focused attention on regulation of pharmaceutical compounding companies such as the one that produced the drugs – the New England Compounding Center Inc in Framingham, Massachusetts.

“We anticipate finding some additional infections,” said CDC spokesman Curtis Allen. He could not say if all 13,000 people had been contacted, but said efforts had been made to find them in the last few days and the recall should limit the outbreak.

In Ohio, health officials said on Monday they were mobilizing community resources, including sheriff’s offices, to check on patients who have received the injections.

“If that means knocking on doors, then that’s what they will do,” Beth Bickford, executive director at the Association of Ohio Health Commissioners, said in a statement. The state has so far reported one case of fungal meningitis likely caused by a tainted epidural steroid injection.

The steroid is used as a painkiller, usually for the back. Meningitis is an infection of the membranes covering the brain and spinal cord, and patients started showing a variety of symptoms from one to four weeks after their injections.

The potentially tainted drugs were produced as early as May and shipped to 76 facilities in 23 states through September, the CDC and Massachusetts Health Department said.

The company, which was previously the subject of complaints, has suspended its operations while an investigation proceeds. It initially recalled the three lots of the drug, and expanded its recall on Saturday to all products compounded and distributed at its Framingham facility.

A compounding pharmacy takes medications from pharmaceutical manufacturers and makes them into specific dosages and strengths for use by doctors.

Complaints against the company in 2002 and 2003 about the processing of medication resulted in an agreement with government agencies in 2006 to correct deficiencies, the Massachusetts Health Department said.

In 2011, there was another inspection of the facility and no deficiencies were found. In March 2012, another complaint was made about the potency of a product used in eye surgery procedures. That investigation is continuing, the state health department said.

The U.S. Food and Drug administration has limited authority over the day-to-day operations of compounding pharmacies, which are regulated primarily by state boards that oversee the practices, licensing and certification of pharmacies and pharmacists.

Compounded products do not have to win FDA approval before they are sold, and the agency has no jurisdiction over how the products are manufactured or labeled for use. Instead, the FDA investigates cases of adulterated drugs in cooperation with state regulators.

The FDA has tried to exert greater authority over compounded drug products under a section of the Food, Drug and Cosmetic Act that covers new drugs. But those efforts led to federal court challenges that resulted in two separate and conflicting rulings at the appellate level.

Tennessee, where the outbreak was first detected, accounted for most of the cases, with 35, including four deaths. Many patients there remain hospitalized, some in critical condition.

Virginia has 23 cases and one death, Michigan 21 cases and two deaths and one person has died in Maryland.

Fungal meningitis is not contagious, the CDC said. Symptoms include fever, headache, nausea and neurological problems that would be consistent with deep brain stroke.

A list of facilities that received vials from the infected lots can be found via the website http://www.cdc.gov . (Writing by Mary Wisniewski; editing by Greg McCune and Mohammad Zargham)

This entry was posted in Allopathy and tagged Allopathic medical problems. Bookmark the permalink.