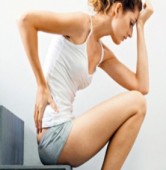 Mother of teenage girl phoned this morning. Her daughter had awoke with painful menses. She was not prone to discomfort in her cycle so this was something new.

I spoke to “A” and she sounded all snuffly. Said she had got a heavy head cold a few days ago. Her period had started earlier in the morning. She said the flow was not heavy, the blood was a bright red and had some clots in it, unusual for her. The pain she was having was really low in her back, and upon questioning, it was actually in the coccyx area.

So looking at the repertory quickly, the symptoms she was having, were covered by 7 remedies.

As the patient in general did not have menstrual difficulties, I looked for a causation that could have triggered this issue. Recalling that she recently got a heavy cold, I added that into the repertory.

The mother has a selection of remedies at home and we we gave Belladonna 30c in water, to dose every thirty minutes for maximum of 3 doses or stop after any dose if amelioration of symptoms set in. Her mother called me back after the second dose and said that the back pain had all but gone, and that her daughter felt much easier and had gone back to sleep.

A bacon and egg sandwich sounds good about now.

This entry was posted in Cases and tagged Case taking. Bookmark the permalink.