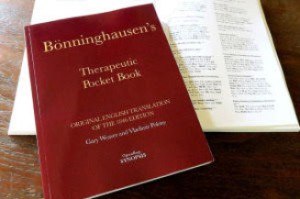 Why view remedies through the P&W repertory?

I have written on the importance of source material, especially of provings, in working to principle. As Hahnemann specified in Aphorism 3, in order to do homoeopathy we need to know what’s wrong with the patient, what the remedies can do and how to match a remedy to a complaint – with the proviso regarding appropriate potency and dosing.

How do we know what remedies can do? Through provings, first and foremost – the symptoms can a substance cause in a healthy person.

Hahnemann’s lesser writings include an essential article published in 1796, among his writings leading up to the Organon published in 1810. It is entitled “Essay on a New Principle for Ascertaining the Curative Powers of Drugs.” In this article, Hahnemann tackles existing methods one by one, and demonstrates their problematic nature. One after the other, with reasoned arguments and logical discussion, he knocks over chemistry as partial, nixes mixing unknown drugs with newly drawn blood, and more. He counsels against the doctrine of signatures, botanical affinity and families, stating categorically that the hints of the natural system “can only help to confirm and serve as a commentary to facts already known… or in the case of untried plants they may give rise to hypothetical conjectures which are, however, far from approaching even to probability.” He discusses experiments on the sick and how many discoveries were made by chance – and then laments “how humiliating for proud humanity did his very preservation depend on chance alone…”

Through step-by-step argument, Hahnemann comes to the conclusion that “nothing then remains but to test the medicines we wish to investigate on the human body itself,” which he states has so far been done “empirically and capriciously in diseases.” A standard human response to medicines, “some natural normal standard,” he states “can only be derived from the effects that a given medicinal substance has, by itself in this and that dose developed in the healthy human body.”

The body of provings which is easiest for us to access nowadays is in the Materia Medica Pura and Chronic Diseases. All the symptoms were carefully sifted through by Hahnemann, so if we see Hahnemann as a reliable source of information, that reliability extends to the provings he collated – and to his decisions to include some symptoms not taken from provings, rather from clinical work. We have less knowledge regarding the provings of other remedies noted in Boenninghausen’s Therapeutic Pocket Book, although here again, if we see Boenninghausen as a reliable source, information about these remedies will be important in our work. There is information in Hughes Cyclopaedia, and many other materia medica refer to provings, but all too often provings information is intermixed with symptoms derived from therapeutic clinical work and poisonings, or separate as in Hughes, but not organized.

But we have another source of information for those remedies whose provings were not collated or overseen by Hahnemann – the Therapeutic Pocketbook itself. Boenninghausen examined and brought together all the remedies in use in his time. Some were proven by Hahnemann but not published by him. Some were proven by Hartlaub and Trinks and others. Furthermore, Boenninghausen was kind enough to give us a grading system, indicating where a symptom derives from a proving of a remedy with grades 1 and 2, and strengthening the relevance of that symptom for that remedy from his clinical work with grades 3 and 4.

This means that if we take a remedy through the Reversed Materia Medica in the P&W software, we can actually gain a picture of the proving through grades 1 and 2, together with reliable clinical expansion on that remedy through grades 3 and 4. This in itself is information from early and primary sources, with Boenninghausen and Hahnemann’s stamp of approval. Furthermore, thanks to P&W, this information is available in English, Spanish, and Hebrew in addition to the original German. And there are other languages on the way. This means that those who have difficulty accessing the Materia Medica Pura in their own languages and use the P&W reversed to shed more light on these primary sources.

How can we begin to analyze this mass of information? The TPB was developed to help repertorize, guide the practitioner towards remedies to read up on more intensively. But the computerized version has given us the ability to access the material in different ways, including using the Reversed Materia Medica as a “back door” into gaining reliable knowledge of remedies where the provings are not accessible.

For example, on a very basic level, we can see a remedy’s position in any rubric. We can see if it’s there because it’s in the proving, graded 1 or 2, or because Boenninghausen emphasized its clinical use with grades 3 and 4. A remedy may appear in a symptom with very few other remedies, giving it additional importance in that symptom regardless of its grade. A remedy may appear in a large rubric, with over a hundred remedies, and there we may want to see if it’s in a higher grade than other remedies, if that symptom is very strongly connected to the remedy we’re examining. The relationship between remedy grade and rubric size may have relevance in the case we’re working on. All this while keeping in mind that the appearance of a remedy in proving is the basis for prescribing, and Boenninghausen’s clinical use of that remedy is an added bonus.

For those interested in working to principle, which means using provings-based materia medica, the reversed MM offers a treasure trove of information about provings which are harder to access, which is definitely worth while exploring.

This entry was posted in Homeopathy and tagged Homeopathy. Bookmark the permalink.