THE CONVALESCENT HOME AT EASTBOURNE

THE HISTORY OF THE LONDON HOMOEOPATHIC HOSPITAL
Presented by Peter Morrell & Sylvain Cazalet. THE CONVALESCENT HOME AT EASTBOURNE
For 15 Women and Girls and 5 Children – 20 Beds

This century -“Woman’s Era” as it has very justly been called – will probably see the swing back of the pendulum and the final adjustment of the woman question.

More and more we see how, when a woman seriously sets herself a task and makes it her business to do it properly, she seldom fails to make a great success.

There is one particular in which her superiority is acknowledged by both sexes – namely, in the making of a home. Man can make money and a great many other things, but with the best will in the world, his home is unhomely until a good woman has put her gentle seal upon it.

Patients at Tea in the garden of the convalescent home, Eastbourne. 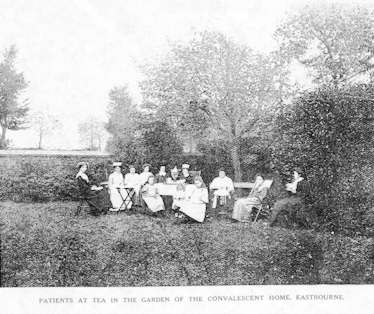 A Convalescent Home more than any other requires a woman’s help and guidance, and the Hospital was particularly fortunate in securing the active efforts and munificence of Mrs. Clifton Brown, who, together with Major Vaughan Morgan, founded the Homoeopathic Convalescent Home at EastBourne.

The Home was opened on Saturday, August 25, 1888. To the indefatigable efforts of the chairman, Major William Vaughan Morgan, in the foundation and organisation of the institution, and to his indomitable energy and influence with other kind friends, the existence of the Home is due, and in the establishment of this new institution a fresh debt was added to those which the cause and friends of homoeopathy already owed to him.

It is interesting at the present day to recall the names of some of the generous donors who assited in making the Home possible, many of whom have unfortunately now passed away : Mr Hugh Cameorn, who assisted at the foundation of the London Homoeopathic Hospital itself and rallied his friends to help in the establishment of the Home by donations amounting to over £ 1,100; Mrs. Clifton Brown, whose munificent gift of £ 1,000 at once made the establishment of the Home possible; Mrs. William Vaughan Morgan, Miss J. Durning Smith, Miss Barton, Miss Isabella Barton, Mr. and Mrs Frank Smart, Mr. James Spicer, the Earl of Dysart, Mr. Henry Tate, Miss Houldsworth, Mr. William Debenham, Mr. Maurice Powell, Miss C. A. Stilwell and Mrs. Whateley Willis, were among a large number of liberal donors to the Foundation Fund.

The total amount received in donations, including the proceeds of a concert at the Duke of Westminster’s London residence, was £ 3,251. This amount enabled the Board to purchase the lease of the house and furnish it, and also meet the unavoidable expenses of its organisation and establishment, without dawing on the subscription list.

The first legacy received for the Home was bequeathed to it while yet the scheme was in an undeveloped stage. General Sir James Alexander, K.C.B. for many years a firm homoeopathist and member of the Board of Management of the Hospital, bequeathed in 1887 the sum of £ 500 to form the first investment for its maintenance. This good example has been emulated by many friends since.

It is to be regretted that in one important particular the original scheme has not yet been carried into effect. The Home was primarily designed for men, women and children, as well as for the nurses of the Hospital. Unfortunately, in a house of its size, the reception of men patients is impossible, and so perforce the patients have up to the present been limited to nurses, women and children.

It must be remembered that men patients are, of all others, those for whom the benefits of a convalescent home are most urgently needed. It is on their health that the maintenance of their families depends. Experience at the Hospital has proved that men patients, forced to resume their daily work too soon after serious illness, are liable to return to the Hospital wards after a breaf absence, whereas two or three weeks at the seaside, passed in freedom from cares and under favourable conditions, would have given them a long lease of health and strenght.

For the moment the male patients of the Hospital are being sent to a convalescent home at Bexhill-on-Sea, by arrangement with that institution.

It is intended to provide a home for the reception of men patients so soon as arrangements can be made. The sum o £ 3,184 has already been contributed for the purpose. The Home has bestowed its benefits during the 25 years of tis existence of 5,000 persons, its admissions numbering 200 annually.

It is maintained by annual subscriptions and is preserved from debt by the income from a legacy left to it by Major Vaughan Morgan.

This entry was posted in Historical and tagged homoeopathy history. Bookmark the permalink.